In the pictures immediately below, the upper left and right pictures and the lower left are icons of Cincinnati architecture. In order, they are Cincinnati Music Hall, City Hall and Elsinore Arch. Many of our church members will recognize the lower right picture as the Essex Street church that our congregation occupied for 70 years. What do they have in common? 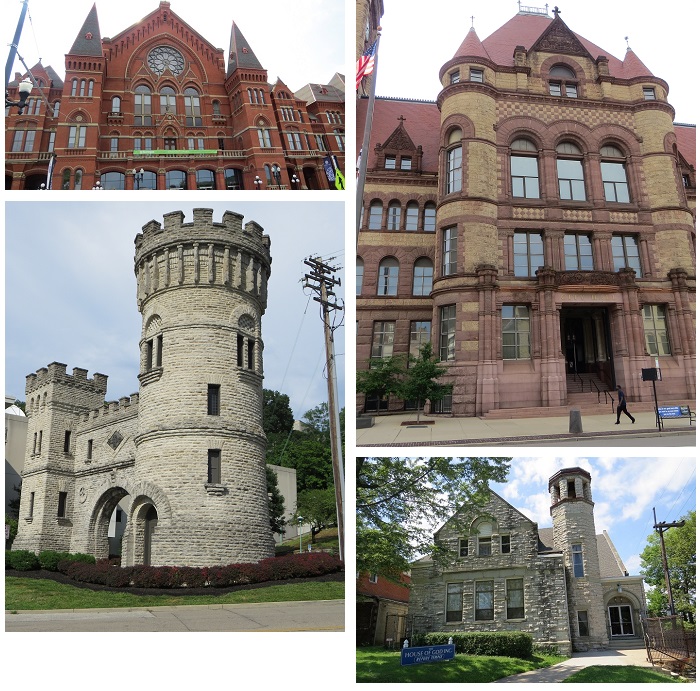 All were designed by the architectural firm headed by Samuel Hannaford. His firm was, without doubt, the most highly acclaimed architectural firm in the city in the late 19th century, when so much building was occurring in a growing metropolis. In all, he and his firm designed over 300 structures throughout the Midwest and South. In Cincinnati, some of his other designs included the Cincinnati Observatory, the Cincinnatian Hotel, the Phoenix Club, the H & S Pogue Department Store, the Times-Star Building and St. George’s Cathedral (the twin spired church on the edge of the University of Cincinnati).

Hannaford was born in England and came to Cincinnati with his family at age 9. As a young adult he graduated from Farmers College and was hired into an architectural firm. He learned the trade and then opened his own firm. In 1887 that firm became Samuel Hannaford and Sons. At his death in 1911 he was President of the Cincinnati Mechanics Institute.

With the urging of Reverend Ulysses Milburn, The First Universalist Society of Cincinnati embarked on a building program that resulted in the Essex Street facility. Since leaving the Plum Street Church in 1884, the First Universalists had been worshiping in a rented church near Peebles Corners. In February 1898, they obtained land via a perpetual lease from Mr. and Mrs. William Rendig. Next, they hired the Hannaford firm to do the architectural plans. Finally, they employed the Michael Marcus firm to build the church. The price of construction was set at $12,660 with options to use a higher grade stone if the church so chose thus increasing the cost. The building committee was headed by George Utter. Edgar Wooley served as the secretary of the committee.

The church was completed in time for Christmas 1898, at a final cost of just over $17,000. Several additions were made to the original plan which accounted for the cost overrun. The church had set aside $15,000 for the entire project and pledges from church members covered the remainder. Thus, our spiritual ancestors opened a church that joined the ranks of Cincinnati’s finest architectural wonders.