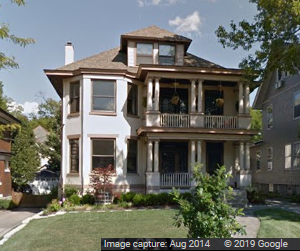 Modern photo of house in Hyde Park where Miss Georgia Green lived in the 1920s-1960s.

If one were to casually read through our church archives from the late 1930’s to the late 1960’s, one name would appear prominently and with great frequency. That person would be Miss Georgia Green. During her 30+ year affiliation with our church, she served in many different capacities. She was a corresponding secretary for the church and her name is signed at the bottom of many communications with other church organizations, with our own regional and national offices, with businesses and neighborhood groups. She also served as church treasurer for a number of years and also was very active on many committees and in the church’s service groups. Hardly a month would pass without her name appearing in church records.

Georgia Green came to Cincinnati from Muncie, Indiana, with her mother in the 1920’s and they took up residence in Hyde Park. Miss Green’s mother passed away in 1936 but before she died, she bought a new house for her daughter at 3430 Stettinius, also in Hyde Park. A reporter for the Enquirer, Louise Hurst, described the house as “cluttered” but a beehive of activity. Stacks of correspondence were piled on a desk, the phone rang constantly and programs and paperwork from her many volunteer activities were prevalent throughout the house. Miss Green lived in the house until the last few months of her life.

Miss Green had become well-established and active in the community by the 1930’s when she was past age 50. She was an executive with the Owens Bottle Company. This company had revolutionized the glass industry with the invention of bottle making machines that replaced hand blown glass bottles.

Georgia Green used her career success to enter other fields of endeavor. She was the founder of the Cincinnati Business and Professional Women’s Club serving it for many years as an officer and representative at national meetings.

She was also very active with the Cincinnati Symphony. She stated that she never missed a Friday afternoon concert and was a season ticket holder for many years. She was a member of the Symphony Club and served as its auditor.

However, Miss Green’s greatest gift to the city was founding and operating the Craft Shop at the Drake Home and Hospital. Drake served as a residence for the handicapped and the Craft Shop featured handicrafts made by the residents. These were offered for sale at Shillito’s and helped the patients both by earning money and giving some purpose to their days at the home. Miss Green hosted a party each month where the residents were offered entertainment and refreshments. Included at each of these parties were 44 dozen donuts. Sometimes she would recruit First Universalist Church members to assist. For example, the church soloist, William Mockbee, would sing patriotic songs at the parties. She also enlisted County Sheriff Dan Tehan and Karline Brown of the local library to provide a full-length movie for these soirees. In 1962, Miss Green was honored by the Drake for hosting the 200th consecutive party for its residents. It was stated that she had not missed any of those 200 parties.

She was not only recognized locally but in 1944 was awarded a “Good American” certificate from the ABC radio network. She was interviewed on one of their nightly national broadcasts when she received the award.

When asked where she got her organizational skills for volunteer work, she stated that much of it came from her work for the Clara Barton Guild of her church. She stated that “We recognize good where we find it.”

Miss Green suffered two broken arms in a fall at the church in 1964. While it caused her to miss a Drake party for the first time in almost 20 years, she coordinated the effort from her home. However, in the late 1960’s, her health began to fail and she was forced to move to an extended care center in Mason. She passed away in 1970 at the age of 90 years. She is buried in Mount Moriah Cemetery in Tobasco.