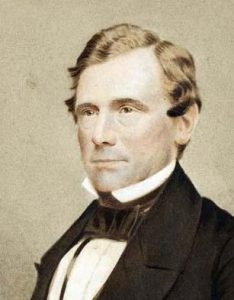 From the birth of our church in 1827 until late in the 19th century, there was a repetitive pattern of who were selected and served as the church’s ministers. Many of those early pastors had their roots in New England. They were often leading lights of the Universalist movement. They would leave the familiar environs of their northeast homes and come to the frontier Queen City. Few would stay for long and inevitably they would leave Cincinnati to return to the East. A few would stay beyond their term of service such as Gerhardus Demarest and Isaac Williamson, but others—such as Josiah Waldo, Abel Thomas, Henry Jewell, George Flanders, Everett Rexford and Willard Spaulding—followed the familiar path back to the East. One of these ministers who came and went was John Greenleaf Adams.

Adams was born in Portsmouth, New Hampshire, the son of John Adams and Sarah Hogdon. There is no evidence that Adams was related to the Adams family of presidents.

Adams served the church from April of 1873 to May of 1876. At the time of his move to Cincinnati, the membership was discussing a major renovation of the church located on Plum Street. If that proved too expensive, then building a new church was the other option. One development during Adams’ three-year stay was the Board of Trustees voted to substitute water for the wine normally used in communion services. By 1876, the board was continually behind in their payments to Adams as hard times had struck again, mainly due to a national financial collapse. Eventually, Adams announced to the board that he intended to retire from the ministry. However, one biography indicates that after his resignation, he went on to serve the church in Melrose, Massachusetts, until his death in 1887. At his leaving from the Queen City, the board tried to raise money to settle their debt with him but were unable to accrue sufficient funds. It was nearly another year before he was fully paid his back salary.

Adams was a prolific writer on church issues. He contributed to several hymnals which were used in Universalist services including Hymns for Christian Devotion. He also authored “Fifty Notable Years: Views of the Ministry of Christian Universalism During the Last Half Century;” “Practical Hints to Believers in the Gospel of Universal Grace and Salvation;” “The Christian’s Triumph Including Happy Death Scenes;” and a memorial book written about the life of his first wife, Mary Hall Barrett. He also served a period as editor of the Universalist newspaper, “The Star in the East.”

Reverend Adams spoke out about moral reforms, took a strong stand against slavery and was a great promoter of Sunday schools. He was noted to be a powerful speaker and was acknowledged for the depth of his prayers.

In 1839, he married Mary Hall Barrett. They were the parents of four children, one of whom died in infancy. Another child, John Coleman Adams, became a highly respected Universalist clergyman and writer, much like his father. John served a number of the most famous Universalist churches of the Northeast including eleven years at All Souls in Brooklyn.

After the death of his beloved wife Mary in 1860, Adams married again to Martha A. Willard. He died on May 4, 1887 in Melrose, Massachusetts.