The month of May brings us annually to Memorial Day where we honor those who have served the country in war and peace and particularly those who have given their lives in that service. That thought led to a search of our church records to discover what activities our religious group may have conducted in support of the war effort during World War II and how many of our members served in the Armed Services during that conflict.

Early in 1942, four members of the congregation were listed as serving in the military and, additionally, Reverend Ralph Boyd had resigned our church’s pulpit in July 1941 to begin training as a chaplain in the U.S. Army. By the end of 1943, the number of members in service had risen to ten. Those were: Lieutenant Richard G. White, Capt. Joe E. Sweets, Frank D. Elstun, George Bowman, Lt. Robert Buescher, Major Burnet Reed, Frances Constiner, William Mockbee, Ben Smith and Stanley C. Stall.

It is not possible to discover the stories of all these ten servicemen, but the tale of one is worth exploring as a tribute to all of our Universalists who served. That veteran would be Lieutenant Richard G. White.

Richard Grant White was the son of long-time members of our church, Richard and Ella White. He was a graduate of Withrow High School and was enrolled at the University of Cincinnati when World War II broke out. He had only months left to graduation, but enlisted in the Air Force in December 1941. His early enlistment could have been expected. His uncle, Horace H. White, was in charge of the bombardment post at Fort George Wright in Spokane, Washington, and another uncle, Colonel Walter White, was the commanding officer at Randolph Field, Texas.

The day after the completion of his training, Richard White married Marian Smith of Nashville, Michigan, at Turner Field in Albany, Georgia. The next day he deployed to England as a navigator on a Superfortress bomber.

Action came early. On one mission, White’s bomber took a direct hit leaving a huge hole in the fuselage of the plane. Despite the critical condition of the aircraft, the crew was able to get the plane back to safety in England. White was awarded an air medal for “exceptional meritorious service” on this flight. Unfortunately, the medal was awarded to White’s wife, living with her parents in Nashville, because Richard White was missing in action having been shot down over Germany on a subsequent flight.

For two months, White’s parents and wife agonized over his fate. Then word was received that he was a prisoner of war being held in the German POW Camp Stalag Luft III. Eventually, letters from White forwarded by the Red Cross reached his parents and wife. He said he was eating well and that his health was good but asked for warm clothes to be sent through the Red Cross as winter was coming.

What he did not tell his wife and parents was that he was placed in a camp with fellow British, Canadian and Australian soldiers and they were planning an escape by tunneling out of the camp. As he described after the war, his first tunnel assignment was to serve as a “stooge”, which was to alert the tunnelers that German guards were approaching. Later he became a “penguin”, which meant he was to carry the brightly colored unearthed sand to another part of the compound where it could be hidden. Shortly before the tunnel was completed, White was transfered to a different section of the camp which was exclusively for American prisoners. The escape from Stalag Luft III took place without White a few weeks later. Sadly, many of the escapees were recaptured and the Germans claimed they executed over 50 of the soldiers who tunneled out of the camp. The efforts of those prisoners at Stalag Luft III were later immortalized in the movie, “The Great Escape”.

Tunneling was also being conducted in the American camp, and White’s assignment there was to map the course of the tunnels. However, before the tunnels could be completed, the entire camp was closed and moved westward to evade the advancing Russian Army. Finally, on April 29, 1945, the prisoners were freed by troops from George Patton’s 16th Armored division.

Richard White, like millions of American soldiers, returned to the normalcy of civilian post-war life. He reenrolled at the University of Cincinnati to complete his degree work and then matriculated to Ohio State University where he completed a Master’s Degree in social work. He went on to work in a number of mental health agencies and organizations, mostly in New Jersey. He spent the last 21 years of his career as the Executive Director of a mental health agency in Camden, New Jersey.

May the memory of Richard White serve as a tribute to all the members of our church, past and present, who have served their country through military service. 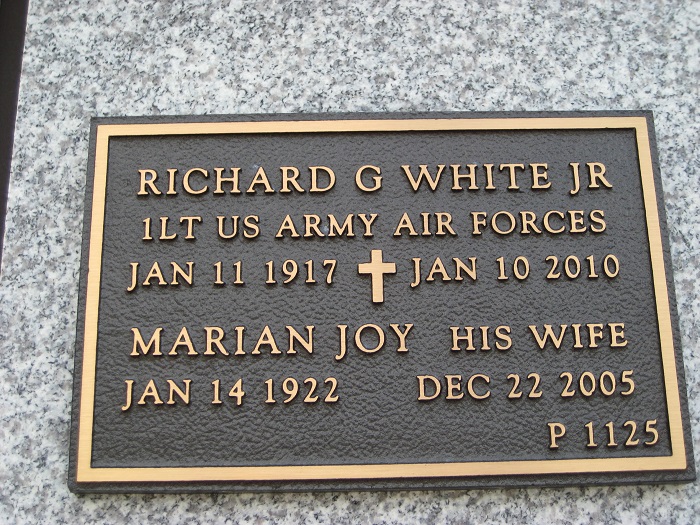