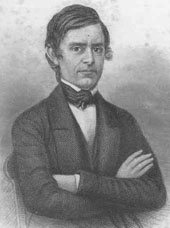 Most Heritage UU Church worshipers are aware that our congregation has been in existence in Cincinnati for almost 200 years. Universalism spread to the Queen City from its roots in New England and the First Universalist Church of Cincinnati was founded in 1827. Nearly all of our early ministers traveled from New England to serve the congregation. Our first minister was Josiah Waldo who was born in New Hampshire and married the daughter of Hosea Ballou, one of the forefathers of Universalism. However, the challenges of coming to Cincinnati proved to go far beyond the duties of a frontier minister.

Traveling to Cincinnati during those early years and surviving here were daunting tasks. Roads were muddy and at times impassable. The Ohio River provided barge and raft transport, which could be dangerous during flood times and impossible during drought. But, the most formidable challenge was the climate of the city, which seemed to foster all sorts of life-threatening disease and chronic illness. Waldo retreated to New England after four years in the city. Death and sickness seemed to follow many successive ministers after Waldo. His replacement, George Rogers, was a tireless preacher who traveled thousands of miles on horseback throughout the South and Midwest as a circuit rider while still serving as our minister. The grind took a toll on his health and he died in Cincinnati at age 41.

Ireland-born William West followed Rogers and served energetically for three years, until the death of his young wife. He grieved so for her passing that he felt unable to continue his pastoral duties and he resigned. Little is known of him after that resignation. West was followed by John Gurley who left the ministry to enter politics. He enjoyed great success until he was felled by a burst appendix at the age of 50 here in Cincinnati.

Our fifth minister, Abel Thomas, was one of the most famous Universalist ministers of his time. He was the author of many books and treatises and was a speaker in high demand across the country. He came to Cincinnati in 1844 as a healthy 37-year-old. Respiratory disease quickly overtook him, and after a year and a half he took a lengthy leave of absence to recuperate in the East. Upon his return, the illness quickly set in again and he was offered a second leave but he refused. He resigned from our pulpit and returned East where he lived a long and very productive existence, though he suffered from the respiratory problems for the rest of his life.

Henry Jewell replaced Thomas. He settled into his new position at age 35 only to lose his wife, Elizabeth, to illness during his three-year tenure in Cincinnati. Jewell was replaced by George Quinby. Quinby and his wife, Lucy, spent nine years in Cincinnati. He served only three as minister but stayed on as a member of the Board of Trustees of the church for another six years. He and his wife had nine children, of whom six died prior to the age of four. Several of these children died in Cincinnati. He took his ill wife back to New England in 1860, only to lose her to death later that year.

Isaac Williamson came to Cincinnati with severe asthma, but found that the conditions of the city made it even worse. He persevered, however, and remained an active force in national Universalism while based in the Queen City. However, he was forced to take numerous trips to the South to escape the city and was only able to serve as a full-time minister with the First Universalists for a short time. Forty-year-old George Flanders replaced Williamson and served for four years. However, during his tenure, his wife Harriet passed away in 1859. Flanders also lost a child who was killed in the Civil War.

It is known that several severe outbreaks of cholera and typhoid plagued Cincinnati during these years prior to the Civil War. Ministers were on the front lines, committing themselves to the ill and dying. To have also been forced to deal with those issues in their own immediate family lives had to be a trial only the strongest could withstand.