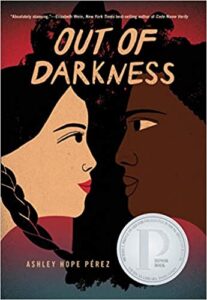 At #4 on the American Library Association’s 2021 Most Banned Books list, Ashley Hope Pérez’s Out of Darkness is our next Banned Book club read!

The novel chronicles a love affair between a teenage Mexican-American girl and a teenage African-American boy in 1930s New London, Texas, occurring right up to the 1937 New London School explosion. Juan Castillo of NBC News wrote that Out of Darkness “stares unflinchingly at racism, classism, segregation and the people who live on the margins of society.” Ashley Hope Pérez takes the facts of the 1937 New London school explosion—the worst school disaster in American history—as a backdrop for a riveting novel about segregation, love, family, and the forces that destroy people.

If you want to know more about November’s Read, check out this awesome review: https://socialjusticebooks.org/out-of-darkness/

The book is available through the public library as a book, audiobook and ebook. Reach out to Laci to join the Banned Book Club mailing list!

Upcoming Meetings (please note that the Banned Book Club dates are on the move due to upcoming holidays!):