Written November 4, the day after the election.

Somewhere up in the hereafter (something I don’t believe in) my father is looking down on me and chuckling.

Dad dropped out of high school at age 16 to work as a chauffeur for Dan Huffman, then a real estate giant in Dayton (Huffman’s signs featured the silhouette of an Indian chief’s head, under which was his motto, “If Huffman can’t sell it, give it back to the Indians.”

He married Mom in 32, my sister came along in 35. All of this in the midst of the Depression, and yet they survived, and when he finally got a full-time job (with union wages) on the assembly line at Delco, they prospered.

Then came the war and the sudden need for a second child to evade the draft. I came into the world in February of 1943, too late to keep him out of the army. Off he went to Texas, Seattle, the Aleutians, to Portsmouth, Virginia, to Casablanca. His unit was under alert orders to take part in the invasion of Japan when the war ended.

He came back to the assembly line, bought a small house with a VA loan, took night school courses to finish high school, then a two-year associate’s degree from Sinclair College, all thanks to GI Bill.

As he rose to middle class, he became, in his words, “self-made.” This from a man whose education, career in management, and comfortable house in a “good neighborhood with good schools” was made possible by VA benefits and the GI Bill.

So why is he chuckling? I don’t know how it happened, but I became a tree hugger, a liberal, a dreamer, someone who leans toward the hopeful, toward change, toward “making things better.”

Dad was a rock-ribbed realist. “You can’t make White people want to like and live with Black people,” was his argument against my support of civil rights. “People need to work,” was how he negated my concerns about pollution and the environment. “Those things you want are nice, but how are you going to pay for all the things you want the government to do?” was how he countered my wishes for better schools, job training, fighting hunger, clean air and water, better housing.

He understood that culture runs deep and is difficult to change. “I made it through hard work. Everyone else can do that too if they want to.”

He understood that good schools and parks, clean air and water benefit everyone. But he realized that “People are always going to vote their pocketbook first.”

He would remind me of his “truths” after each election that fell short of my hopes and expectations.

So, today he chuckles as I slump in my chair and read the sad news of this election. “I told you so,” he reminds me.

Well, fine. Enjoy your moment, Dad. But I’m going to continue to be a tree hugger, a liberal, a dreamer. 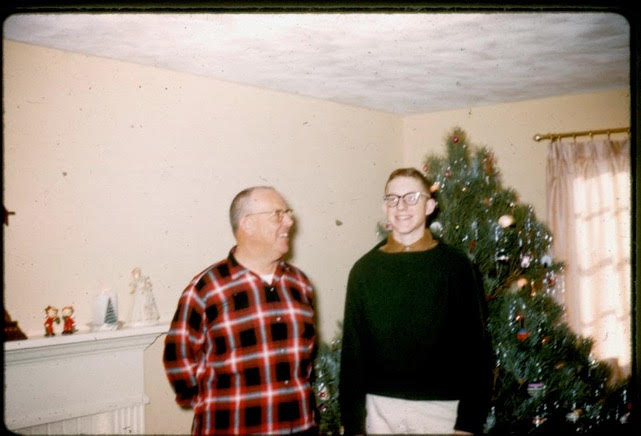 Dad and me in a rare peaceful moment during my junior year in high school.