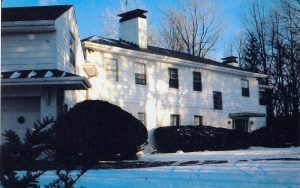 Salem Acres, the location of our congregation in 1975

In 1975, the Unitarian Universalist Council of Cincinnati sponsored the celebration of the 150th anniversary of the American Unitarian Association. The event was held over two days at the William Howard Taft house in Mt. Auburn. The Council had been formed in 1961 by representatives of the five UU churches of Cincinnati who met to discuss issues of liberal faith. The group was originally called BOGSAT or Bunch of Guys Sitting Around a Table. Its main goal was to promote cooperation and communication between the five societies. They also supported an ecumenical campus ministry and a city-wide interfaith coalition. In keeping with the goal of communication, they published the “Cincinnati Interliberal Newsletter.”

The five societies represented at the first meeting were First Unitarian, First Universalist and St. John’s Unitarian along with Eastern Hills and Northern Hills fellowships. First Unitarian was founded in 1830 and had to survive a split during the Civil War over the slavery question. The church merged again in the 1870’s to wage a successful opposition to public school Bible reading. The congregation settled in its present location in 1889.

Our congregation, of course, dates back to 1827. At the founding of BOGSAT, we were still worshiping at the Essex Street location but by 1975 had relocated to Salem Acres.

St. John’s Unitarian emerged in the early 1800’s from a coalition of Lutheran churches. There was much disagreement within the German Lutheran faith and the St. John’s congregation was formed from the most liberal of the dissenting voices. Services at St. John’s were conducted entirely in German until 1912 when English was used on the first and third Sundays of each month. By 1918, English became the sole language spoken in church though much of the written liturgy was still in German. It was shortly after this that the church joined the Unitarian association. The church was located at 12th and Elm for 80 years and moved to its present location in 1951.

Eastern Hills Fellowship was founded in 1959 and contained some members from our own Essex Street congregation. Worship was conducted for 13 years in a school house until a permanent location was found in Madeira.

Northern Hills was founded in 1961 by members of First Unitarian. Its members constructed a new facility in 1967 and the first service there was held on Christmas Eve of that year.

While Unitarian thought had long existed, the American Unitarian Association was formed in Boston in 1825. It was created as a response to a split between Unitarians and the Congregational Churches. Forty-four Unitarians gathered in Boston to debate the wisdom of declaring themselves and their beliefs publicly in a time still filled with religious intolerance.