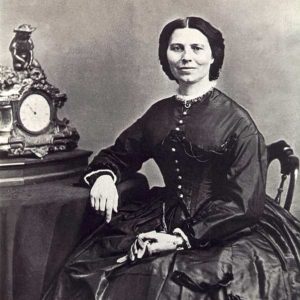 If you have been wondering who funded the playground canopy and the women’s restroom improvements, here’s the scoop! If you were curious about who provides the scholarships for the Hope Springs Women’s Retreat, read on! If you heard that someone made donations to a camp for diabetic girls, Planned Parenthood and the UU Women’s Federation but were in the dark about the donor, well, it was CLARA!! You know…Clara Barton!

The Clara Barton Guild of Heritage UU Church has its roots in the First Universalist Society’s Women’s Alliance, founded in 1917. When re-named to honor Barton, the Alliance wanted to show its respect for the “Angel of the Battlefield” (Civil War) and the founder of the American Red Cross. Barton ‘s religious leanings were Universalist, which also contributed to the her being chosen for the Guild’s name.

For decades, the women held monthly meetings with programs, dues and fellowship. In the 1960’s, church member Cora Littell donated 100 shares of P&G stock to the church and another 100 shares to the Guild. This allowed the Guild to take on larger projects to benefit the church and the larger community. Eventually, the leaders of the Guild gave their funds to the church’s holdings. However, the women still desired to have some money solely in their control and held various fundraisers. Today, the main event which feeds their budget is the Annual Book Sale, which realizes about $1,200. A slight surplus is sometimes realized from retreat registrations and annual dinner fees.

The Clara Barton Guild has been a significant support to many projects at Heritage. Recently, they purchased the canopy for the playground, provided scholarships for the women’s retreat, and refurbished the women’s restroom. Donations of $100 each were made to the Clara Barton Camp for Diabetic Girls, the UU Women’s Federation and Planned Parenthood. The women attending the annual dinner discuss and decide to whom donations should be made.

All Heritage women and those who identify as women are “automatically” members of the Guild. Women age 16 and above are included. Although there are currently no officers, long-time members Rae Jane Araujo, Julie Kane and Joann Meyer can provide additional information.