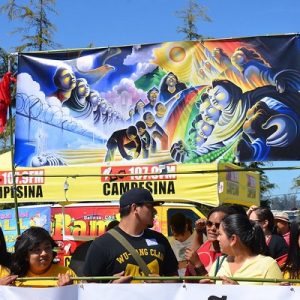 Our hymn of the week is #305, “De Colores,” sung by Les Tacy, Heritage UU Church’s Music Director. This was sung for Heritage’s Flower Communion on May 2nd.

This popular Mexican folk tune adds beautiful, musical color to the selections in our hymnal, “Singing the Living Tradition”. The lyrics were written by David Arkin and published by the First Unitarian Church of Los Angeles.

According to Wikipedia, De Colores “…is associated with the United Farm Workers union, as one of the most commonly heard songs sung during rallies. The song is also associated with Mexican folklore, but it is not known for certain when and where the song originated. It is believed to have been in circulation throughout the Americas since the 16th century, with melodies being brought over from Spain during the colonial era.”

Enjoy singing along with this wonderful hymn. Thanks to Stephanie Tacy for creating the video for this rendition.

Most church activities are occurring virtually. Through August 2021, no church-affiliated groups are gathering indoors. You can read more at the HUUC Policy Related to COVID-19.