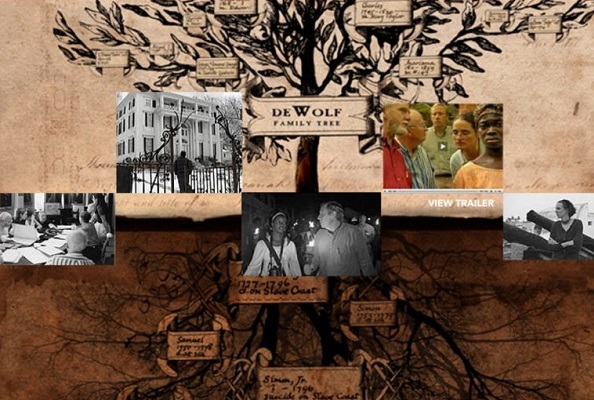 In the feature documentary Traces of the Trade, filmmaker Katrina Browne discovers that her New England ancestors were the largest slave-trading family in U.S. history. She and nine cousins retrace the Triangle Trade broadcast by PBS in 2008 of a remarkable journey which brings them face-to-face with the history and legacy of New England’s hidden enterprise.

From 1769 to 1820, DeWolf fathers, sons and grandsons sailed their ships from Bristol, Rhode Island to West Africa with rum to trade for African men, women and children. Over 10,000 captives were taken to plantations that the DeWolfs owned in Cuba or were sold at auction in such ports as Havana and Charleston. Sugar and molasses were then brought from Cuba to the family-owned rum distilleries in Bristol. They amassed an enormous fortune. By the end of his life, James DeWolf had been a U.S. Senator and was reportedly the second richest man in the United States.

His descendants’ quest to understand the privileges they enjoy as a result of human trafficking can help all of us understand how we too are beneficiaries on this 400th anniversary of the American slave trade.

Broadcast by PBS in 2008, the documentary is not available for streaming online. The May 24 screening and discussion will be free and open to the public. Advance registration requested but not required at https://tinyurl.com/Traces2019.

You can learn more about the film at the film website. If you have any questions about this showing of the film, please send email to: