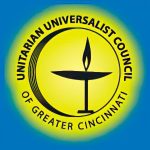 The UU Council originated in the 1960’s as leaders of many diverse religious traditions came together to address serious issues facing our city. An interfaith organization, the Metropolitan Area Religious Coalition of Cincinnati (MARCC), was formed to speak with a strong, united voice to address social concerns such as racism and poverty. Local UU congregations decided to form a local united organization so that we could be a significant part of MARCC.

As a part of MARCC, we participate in annual meetings with people from many faith traditions to choose two major issues to focus on for the coming year. Currently, MARCC is concentrating on displacement/affordable housing/homelessness and on community-police relations/justice reform. In cooperation with the Catholic Archdiocese, MARCC has established an identification card that can be carried by any resident of Hamilton County and is particularly valuable for undocumented immigrants and recently incarcerated people. MARCC has established a court watch program that a number of members of First Unitarian Church and St. John’s UU Church have participated in. Judges and attorneys have praised the program for helping to shine light on our criminal justice system.

The UU Council has taken the lead on important joint UU projects. On March 4, 2012, Lee Meyer, from First Unitarian, was the project chair for the March Forth for Justice event on immigration justice at the Sharonville Convention Center. The keynote speaker was Rev. Susan Frederick-Gray, at that time Minister of the UU Congregation in Phoenix, Arizona (and now President of the national Unitarian Universalist Association). The UU Council coordinates local UU participation in the Cincinnati Pride Parade and in the Festival of Faiths. The council contributes financially to Unitarian Universalist Justice Ohio (UUJO), and at our September UU Council meeting UUJO representatives led a conversation on UU the Vote.

Local UU Council leaders and others met recently to discuss a united local participation in Beloved Conversations, an anti-racism program from Meadville-Lombard Theological School that a few of our members have already been involved with. Ann Jarboe, Vicki Freimuth, and I are the Heritage representatives to the UU Council, and we would welcome others. To learn more, please contact any of the three of us, or call me at 513-638-5746.