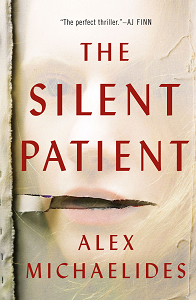 One reviewer described the Heritage women’s book club (also known as Babes With Books or BWB) selection for their February 15 meeting as, “That rarest of beasts: the perfect thriller.” Be prepared to lose sleep when you read the club’s selection, The Silent Patient, by Alex Michaelides, since you won’t want to put it down. The novel starts as a woman shoots her husband in the head five times and then decides to stay silent thereafter. How can her physiotherapist help her when she refuses to talk? Only if you read the many intriguing plot twists will the answer become apparent. I challenge you to figure it out before the final pages, but you will have all the necessary clues.

The BWB’s reading future selections and meeting dates are as follows:

All meetings are held from 7 to 9 p.m. in the Heritage Room, unless otherwise announced.

All women (be they members or friends) are always invited to any BWB meeting – whether they have read the book or not. Unless otherwise announced, the meeting’s book selection is available on hold for the Heritage Book Club at the Anderson Township branch of the Hamilton County Library approximately a month in advance.

For inclusion in the BWB Google group emails, contact the Heritage office.