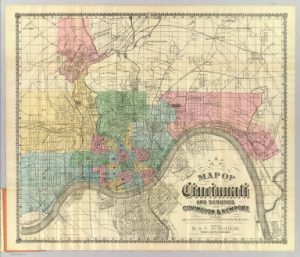 Greater Anderson Promotes Peace (GAPP) and Anderson Churches for Racial Unity (ACRU) will host an in-person screening of Race and Racism in Cincinnati, a 3-part docuseries, in September and October. The docuseries is the telling of Cincinnati’s history from the racial margins, a history that is not often told in school curriculums or in mainstream (white) culture. The screenings will be held at Immaculate Heart of Mary on September 13, 27, and October 11, at 7:00 p.m.

This video series shares a people’s history that places storytelling authority in the hands of common people, rather than political leaders or other figures of power who have crafted narratives to benefit their agenda. This series features three separate hour-long videos that each tackle a different time span, starting from Cincinnati’s birth and bringing us to the present day. Each viewing will be followed by a discussion session. This series was produced by Intercommunity Justice and Peace Center. IJPC recommends that participants plan to attend the full series. Registration information will be available in early August. Contact: