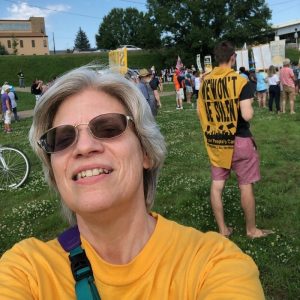 As noted in the news, the For the People Act establishes standards for voting, elections and representation, including congressional campaign financing and gerrymandering. It has passed the U.S. House but not the Senate. A procedural rule change that would increase the likelihood of passage in the Senate has been opposed by West Virginia senator Joe Manchin.

On Monday, June 14, the national Poor People’s Campaign held its Moral Monday rally in Charleston, West Virginia. The purpose was to add pressure for the rule change. Heritage member Rebecca Pace was there to show her support for the rule change and for the For the People Act.

Rebecca said “It was great to hear Rev. William Barber speak about the Poor People’s Campaign. I believe voting reform is the first step, to the policy changes we need, to address the poverty and inequality that plagues our country.”