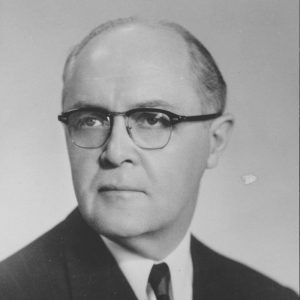 The birthday of one of Unitarian Universalist’s theological ancestors, James Luther Adams, is November 12th. Here is one story told about him when he lived in Chicago, as told by Jessica York.

In 1948, most congregations and houses of worship in the United States were segregated by the color of their members’ skin. Some were segregated by law; others by custom or by a lack of actively trying to welcome and include all people. The First Unitarian Society of Chicago was one of these congregations. Although their church was located in a neighborhood with many African Americans, only whites could join, according to the written by-laws of the church, and according to custom.

The day came that many members began to believe they needed to take action against racism, if they really wanted to live their values and principles. The minister, the Reverend Leslie Pennington, was ready for this day and ready to take action. So was James Luther Adams. James Luther Adams was a famous liberal theologian and social ethicist — a person who studies religion, beliefs, and values. Doctor Adams taught at the Meadville Lombard Theological School, right across the street from the First Unitarian Society of Chicago. And he was a member of the congregation’s board of directors — a leader in the congregation.

Along with some others, Reverend Pennington and James Luther Adams proposed a change in the church’s by-laws to desegregate the church and welcome people whatever the color of their skin. They wanted to include, not exclude. They saw this as a way to put their love into action.

When the congregation’s Board of Directors considered the desegregation proposal, most of them supported it. However, one member of the board objected. “Your new program is making desegregation into a creed,” he said. “You are asking everyone in our church to say they believe desegregating, or inviting, even recruiting people of color to attend church here is a good way to tackle racism. What if some members don’t believe this?”

Desegregation was a very controversial topic. In 1948, anything about skin color and racism was controversial. Some people, even some who supported African Americans in demanding their civil liberties, believed in a “separate but equal” policy, which kept people apart based on their skin color.

Respectful debate ensued at the First Unitarian Society of Chicago. Both sides felt, in their hearts, that their belief was right. Perhaps they were so busy trying to be heard they forgot to listen. And so, they kept on talking.

The debate went on in the Board of Directors’ meeting until the early hours of the morning. Everyone was exhausted and frustrated. Finally, James Luther Adams remembered that we should be listening twice as much as talking. He asked the person who had voiced the strongest objection, “What do you say is the purpose of this church?”

Suddenly, everyone was listening. Everyone wanted to hear the answer to this crucial question. Probably, the person who objected was listening especially hard to his own heart, as well as to the words he had heard from other Board members through the long discussion.

The Board member who opposed opening the church to people of color finally replied. “Okay, Jim. The purpose of this church is to get hold of people like me and change them.”

Most church activities are occurring virtually. Through March 2021, no church-affiliated groups are gathering indoors. You can read more at the HUUC Policy Related to COVID-19.