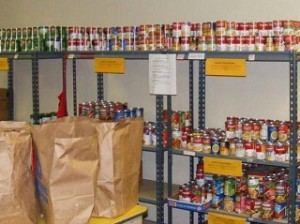 Shelves of food at the Inter Parish Ministry food pantry

Inter Parish Ministry (IPM) (website) is a nonprofit organization that has been serving low income, needy families in eastern Hamilton County and all of Clermont County for over 50 years. Its mission is to provide food, clothing and other communal support to those in need and to empower clients with information, support and services to improve their lives. Heritage Church takes up a monthly outreach offering for IPM and collects food donations. The youth group conducts food drives for the pantry at local grocery stores. The congregation also has several members who volunteer at the food pantry. Send email to: 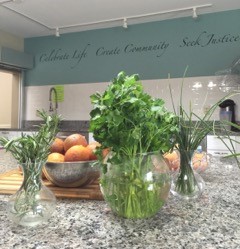 Ingredients in the Heritage Church kitchen

Heritage Healthy Cooking Classes: Heritage has partnered with Inter Parish Ministry and with the Boys and Girls Club of New Richmond to offer free cooking classes for those in need. Clients leave feeling empowered to prepare the recipes on their own and make small changes to improve their health. These classes are designed for those in need to gain the basic cooking skills that can enable them to make healthier and more economical food choices. Participants receive the recipes, a meal, a sense of connection and many of the ingredients needed to prepare the recipes at home. The meal that we serve after each class is a truly a time of radical hospitality. Send email to: 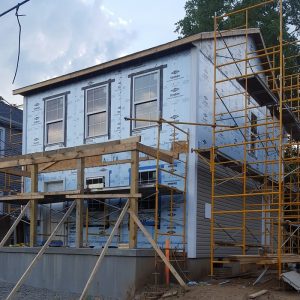 Habitat for Humanity house under construction in Madisonville.

Habitat for Humanity (website) has a vision of a world where everyone has a decent place to live.  Habitat helps build homes for people who otherwise could not afford to live in a home of their own. In 2014 Heritage UU Church joined the Madisonville Area Habitat for Humanity Coalition. Since then, Heritage volunteers have helped work on several homes in the Madisonville area. Send email to:

Interfaith Hospitality Network (IHN) (website) uses churches to provide temporary housing to homeless families. A key aspect of the program is keeping families together, which most homeless shelters don’t do. The central agency also helps the adults overcome all the hurdles involved in finding a job and a permanent place to live. Four times a year, homeless families sleep for a week at First Unitarian Church, and Heritage UU Church is one of the churches that has provided assistance by cooking dinner, leading evening activities for the families, providing overnight hosts, and providing weekly coordinators. Send email to:

Plarn Sleeping Mats for the homeless have been created out of plastic shopping bags. These mats are distributed to homeless youth by Lighthouse Youth Services.

Internal workshops dealing with systemic racism have been offered by the church starting in 2015. These have included the Implicit Bias workshop, the discussion series on The New Jim Crow book, a viewing and discussion of the film Slavery by Another Name, and a discussion of the book Tears We Cannot Stop. Another workshop developed by Heritage, “Awakening Our Awareness of Whiteness,” is a one-day workshop that has been presented in several venues for several groups. Send email to: 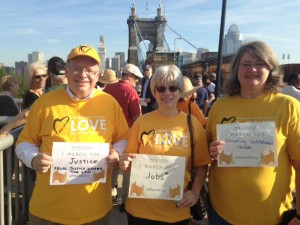 Participation in external organizations’ events has rounded out our racial justice involvement. Two members of our congregation have been attending the Coalition for a Just Hamilton County. Several marchers participated in the “Bridges to Cross, Building Bridges” march that celebrated the 50th anniversary of the Voting Rights Act. Other activities attended by Heritage people include the Cathedral Symposia Series on Mass Incarceration, the Rethinking Racism series of gatherings, the “Race Conversation: Healing What Divides” presentation, the Black Lives Matter march in Cincinnati, and the multi-organization Peace and Healing prayer vigil led by Juneteenth.

Green Burial is a focus of our minister and a group in the church. Green, or natural, burial is a way of caring for the dead with minimal environmental impact that aids in the conservation of natural resources, reduction of carbon emissions, protection of worker health, and the restoration and/or preservation of habitat. A separate organization, Heritage Acres Memorial Sanctuary, has been formed. For more information, contact our Senior Minister. 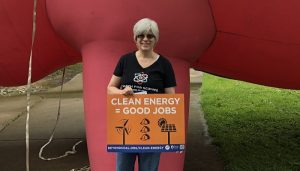 Opposition to state law changes that would weaken environmental protections is something undertaken by members. One of these issues surfaced in 2019, when Ohio House Bill 6 was drafted to subsidize nuclear power plants, gut clean air standards, and cut support for renewable energy standards and production in Ohio. Members expressed opposition through contacting elected representatives and participating in protest rallies. 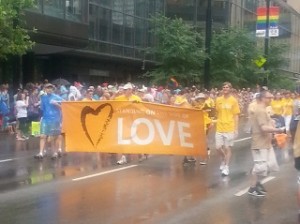 Cincinnati Pride (website) celebrates the diversity of the lesbian, gay, bisexual and transgender community and raises awareness in the area. Heritage UU Church members march in the parade and help work the UU booth at the festival. Send email to:

An LGBT Ally Training Curriculum has been developed by members of Heritage Church. The curriculum is free to download and use, and can be found here.

The law and LGB rights were at issue when the Sixth Circuit Court of Appeals (based in Cincinnati) heard testimony on marriage equality cases from four states in 2014. Heritage congregants took part in rallies and sat in the courtroom during testimony. It was these cases, which were consolidated under the name Obergefell vs. Hodges, that went to the U.S. Supreme Court and resulted in the court’s ruling in favor of marriage equality in 2015. 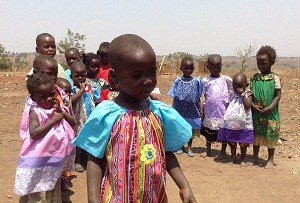 Little Dresses for Africa (website) was the social outreach project that the Clara Barton Guild organized around for its 2014 project. Little Dresses on for Africa is an organization founded in 2008 with volunteers in all 50 states. The women of the church made 146 beautiful little dresses for poor girls in Africa. These dresses provide not just clothing but help and esteem for the girls. Girls who are dressed well are less likely to be mistreated. The dresses are made in such a way that they can be let out as the girl grows.

YWCA safe houses (website). The YWCA in Cincinnati provides safe crisis line assistance, protective shelter and necessary supportive services for battered women and their children to move them toward self-sufficiency, independence and freedom from abuse. The church’s Clara Barton Guild chose this as one of its 2015 projects. The women made blankets and provided pillows, quillows (google it!), and items that would be appreciated when someone seeks shelter with only the clothes on their backs. Send email to:

Lighthouse Youth Services (website). The women provided items that “make a house a home”–for young adults for whom Lighthouse finds housing–with items such as cleaning supplies and possibly other necessities like small kitchen appliances, accessories, etc. Send email to: 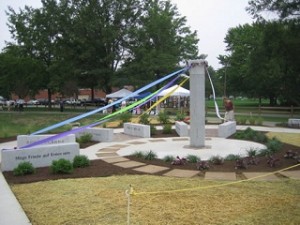 Greater Anderson Promotes Peace (GAPP) (website) is a nonprofit organization serving Anderson Township, Mt. Washington, Newtown and western Clermont County since 1999. GAPP provides community-building activities and programs that honor diversity, encourage understanding and promote inclusion. A member of Heritage UU Church is Executive Director of GAPP, the church’s Rev. Gupton serves on the Advisory Board, and members of the church are often involved in GAPP actions. Send email to:

Cincinnati Sanctuary Congregation Coalition. This coalition was formed in response to concerns regarding unjust incarceration and deportation of immigrants from Latin America and immigrants who are Muslim. Some member congregations will take in and shelter one or more immigrants within its walls if the need arises, while other congregations, such as Heritage Church, will provide support. For more information, email:

With the Soles4Souls (website) project, the Clara Barton Guild periodically collects used shoes for donation in this country and overseas. The collection bin is in the back hallway. Send email to:

Renting Partnerships(website) is a nonprofit organization with a vision of reducing the gap in wealth between homeowners and renters by offering a third housing alternative. A member of Heritage UU Church is Executive Director of Renting Partnerships. Send email to:

Heritage Church has a number of veterans of the armed forces, and their perspective is sometimes shared during Sunday morning services. Inquiries regarding veterans’ Concerns can be made at:

Many other church groups have had social justice projects at various times.

Unitarian Universalist Justice Ohio (website). UUJO organizes justice seekers statewide to promote education, service and advocacy consistent with Unitarian Universalist liberal religious principles and to witness with and on behalf of marginalized groups and individuals. Heritage Church is a “justice congregation” member of UUJO. For information on Heritage involvement, send email to:

Unitarian Universalists for a Just Economic Community (website). UUJEC is a progressive organization committed to economic justice for all. Its philosophy is rooted in the UU liberal religious tradition – to create a world of justice, equity, and compassion. Its work contributes to a broader movement for social change, in collaboration with the UUA, UU Service Committee and grassroots organizations. Heritage Church has joined UUJEC as a congregation.