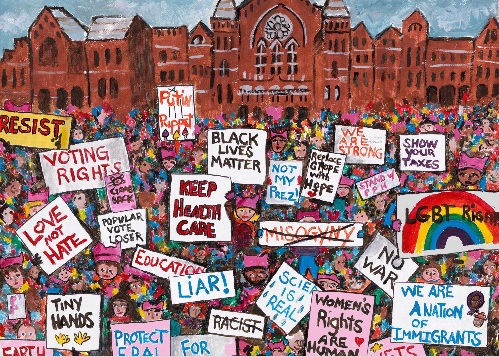 Join with other Heritage folks and many people from around the Tri-State in the Cincinnati Women’s March for 2020. This event is sponsored by United We Stand Cincinnati, which is committed to the National Women’s March on Washington (NWMW) Agenda, as an officially recognized sister organization to the NWMW. United We Stand Cincinnati has several commitments, including: to human rights for all; to grass roots organizing; to supporting efforts of communities of color and other minorities; to being non-partisan and non-party-affiliated; and to nonviolence as practiced by Rev. Dr. Martin Luther King, Jr.

From the Facebook Page: “We’re back! Join us on January 18, 2020, at Noon at Sawyer Point Park in Downtown Cincinnati! We will rally at the P&G Pavillion area at Sawyer Point, starting at 12 pm, with a march following a short program of speakers. We will return to the park after marching for an open mic session, music and interaction with local organizations. This anniversary action is our rededication to the international movement of women’s strength, power, and determination.”