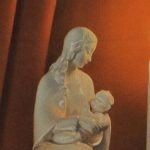 What were your Christmas celebrations like in the past? All of us must reminisce to some extent about our own childhood Decembers. Those days certainly were different from recent Christmas seasons. For some of us, Black Friday was when grade cards were sent home, not a day of crazed shopping. But, in many ways, there is much similarity. Surely most of us remember seeing Frosty the Snowman with Burl Ives decades and decades ago, the same one that will be televised this Christmas season. Hip-hop Christmas albums will probably be aired this year but we also have those old Christmas hymns to harken us back to a time long past. We will hear some of them again at our annual Christmas Eve service. What was Christmas like in 1942 for our church? That year offers us the oldest extensive information available from our archives about a Christmas from the past. Let’s take a look.

America was a little over a year into World War II and the war was not going well. Rationing had set in. Many of our finest men and women were off to fight the war. Industry was gearing up to full-time war production. Franklin Roosevelt was in the middle of his third term and had served longer than any other president.

The minister of our church was Kenneth Hutchinson. He had begun his service to the church earlier that year. He replaced Ralph Boyd who had enlisted for chaplain duty in the U.S. Army for one year’s service in July 1941. Boyd had asked for a year’s leave of absence from our church but the Board of Trustees had denied the request. After months of an empty pulpit, Hutchinson had been hired to replace Pastor Boyd. Reverend Hutchinson offered this observation of a wartime Christmas. “In these days of war and strife, the Christmas story of ‘peace on earth, good will toward men’ may sound rather fanciful. We are interested in winning a war. We are not concerned with ‘good will toward men,’ we are concerned with guns and tanks and planes and battleships. To sing the carols, re-tell the account of the shepherds, and describe anew the journey of the wise men, while in the midst of this current struggle, may even seem to some as a cause for questioning our sanity. Now we may ask, is this because these other things are more important, or is it because our vision has become rather sadly limited? There comes from time to time in the midst of the affairs of the moment, that occasion when our eyes are turned once again to the eternal truths of the ages, and we think of things as they ought to be. May that time come to us at this Christmas season. May we see beyond the temporary figures of marching men to the eternal vision of the little child. May we hear above the din of crashing guns, the eternal melody of the angels’ song. May we say in the words of Tiny Tim: ‘God bless us, everyone.’”

On Monday evening, December 14th, a festive Christmas party was held by the Clara Barton Guild at the home of Miss Georgia Green. The highlight of the evening was a presentation by theater and radio producer Miss Olive Kackley. Miss Kackley had a national reputation and was one of the advisors to Eleanor Roosevelt on how to present her radio addresses to the nation during the war. Records from the party also reported that Lydia Beck “dedicated the Guild’s annual charity in the form of tiny stockings well filled with sterling silver and hung upon a tiny Christmas tree”.

On Thursday afternoon, December 17th, a blended regrouping of the church’s other two women’s groups was held in the church parlor. Discussion was held as to what their new name would be but for the time being, they were identified only as the “Afternoon Group”. At the end of the meeting, each member related the Christmas customs of different countries.

On Friday evening a family supper night was held at the church along with the school Christmas party. Santa Claus was present. Each member was asked to bring a wrapped, ten-cent gift.

In the December 27th order of service, those members of the church who had enlisted in the military were mentioned. They were: George Bowman, Richard White, Ben Smith, Armin Ulm, Ralph Boyd, Burnett Read, William Mockbee and Joseph Sweets. In addition, it was noted in the November Board of Trustees minutes that trustee Robert Buescher was absent from the meeting because he was in Dayton enlisting in the air corps. He was later to be mustered out as a 1st Lieutenant in August 1945.

The annual Christmas service was held on December 20th. It opened with an organ devotional, “Christmas Pastorale” by Harker. It was followed by a violin solo “Agnes Dei” by Bizet and performed by William Stoess, the music director for WLW. Among other accomplishments, Stoess was responsible for originating the musical background to WLW’s afternoon dramas. These broadcasts became known as soap operas because of their sponsorship by Procter and Gamble. During the war, he moved on to ABC in New York.

Next, a processional hymn accompanied the entry of the children and the choir. That was followed by the call to worship and a somewhat familiar covenant:

“We would strive to make love the doctrine of our church,
the quest for truth its sacrament,
and help to others its prayer.
We would strive to dwell together in peace,
to seek knowledge in perfect freedom,
and to serve mankind through fellowship:
To the end that we may grow into harmony with the divine.
Thus, do we now covenant anew, with each other and with our God.”

The service continued with the doxology:

“Praise God that good is everywhere.
Praise to the love we all may share,
The life that thrills in you and me;
Praise to the truth that sets us free.”

A scripture reading of the Christmas story followed with an anthem sung by the choir, “The Angels’ Song” by Stickles. A reading and pastoral prayer were offered prior to the offertory. A solo was offered by Clare Sole “Voices of the Sky” by Matthews. Miss Sole was a student at the Conservatory. Next came “The Legend of the White Gifts”. White gifts had been collected by the church and were offered to needy members of the church and the Walnut Hills community. [For more on white gifts, see the note below.] A congregational hymn preceded the sermon by Reverend Hutchinson which he titled “He Came Too Soon.”

The service ended with the singing of “O Little Town of Bethlehem,” the benediction and finally an organ postlude of Handel’s “Hallelujah Chorus.”

Thus concluded the Christmas celebration for our Universalist forefathers and foremothers in 1942. 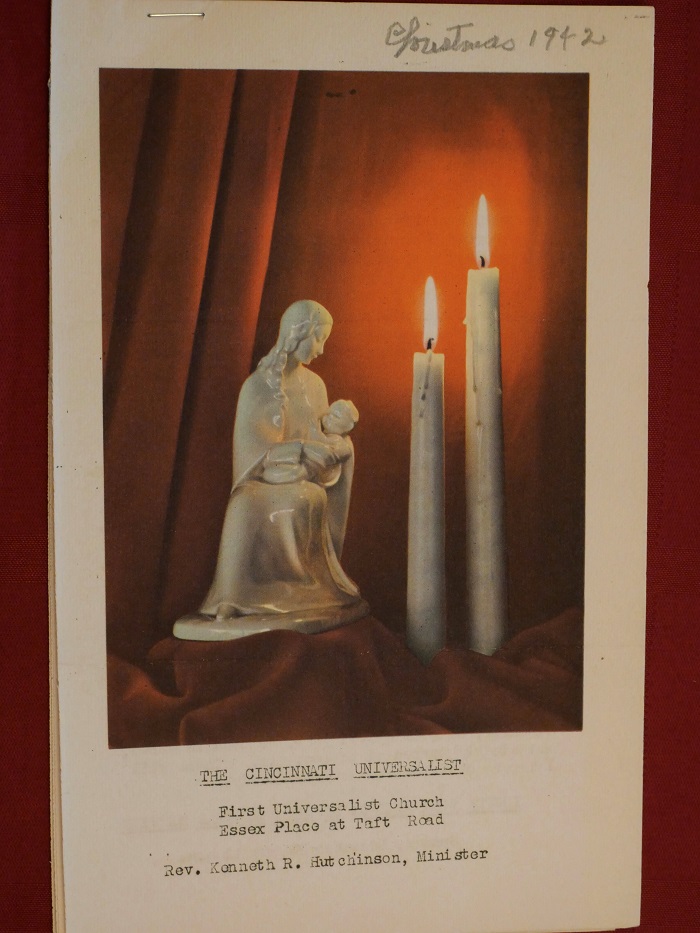 For more on white gifts, see History of the White Gift.