Join with others at Heritage as we search for truth and meaning in considering our response to a proposed Eighth Principle.

The work of dismantling racism, both in terms of personal bigotry and in the daily reality of systemic oppression, is critical at national and local levels. It is also challenging us as Unitarian Universalists to look inward into our own congregations and institutions.

In the August Heirloom the Racial Justice Team provided the text of the Statement of Conscience passed at the 2021 General Assembly titled “Undoing Systemic White Supremacy: A Call to Prophetic Action.” During the October 10 worship service, Rev. Bill spoke about, and provided the text for, a proposed 8th Principle* which invites UUs to make the work of “building a diverse multicultural Beloved Community and accountably dismantling racism and other oppressions” a core part of congregational life.

At least 117 congregations have already adopted the 8th Principle and many are discussing the Statement of Conscience and how to apply it in their own communities. Beginning this fall and continuing into the winter/spring, Heritage members are invited to join this conversation during in a series of eight programs to learn about and discuss this important opportunity for our own church community. We hope everyone at Heritage will be a part of the discussions.

The first two dates for this journey we’re calling 8 For The 8th are already scheduled: November 12 and December 10. The remaining 6 events will be coming in the new year.

The first event of the series is a screening of the film Home of the Brave on Friday, November 12, at 7:00 p.m., in-person in the sanctuary. This movie chronicles the trip that Viola Liuzzo, a Unitarian Universalist and Detroit mother of five, took in response to Dr. King’s plea for help with the March from Selma to Montgomery on Sunday, March 21, 1965. She was murdered that night while driving between Montgomery and Selma, shuttling marchers home after the historic journey. This film documents her journey, explores the profound impact her murder had on her children, and provides historic details surrounding her death and its aftermath.

A discussion following the film will include its powerful story, and how her bravery calls us to action today. A separate virtual option can be arranged for those not comfortable with attending in-person. Please contact the Racial Justice Team at: RacialJustice1@huuc.net

* We, the member congregations of the Unitarian Universalist Association, covenant to affirm and promote: journeying toward spiritual wholeness by working to build a diverse multicultural Beloved Community by our actions that accountably dismantle racism and other oppressions in ourselves and our institutions. 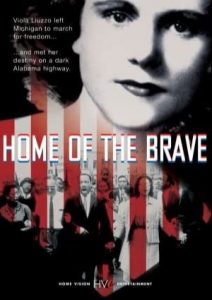 The film Home of the Brave will be the focus of an evening discussion led by the Racial Justice Team on Friday, November 12, at 7:00 PM, in-person in the sanctuary. This movie chronicles the trip that Viola Liuzzo, a Unitarian Universalist and Detroit mother of five, took to help with the March from Selma to Montgomery on Sunday, March 21, 1965.

She was murdered that night while driving between Montgomery and Selma, shuttling marchers home after the historic journey. This film documents her journey and explores the profound impact her murder had on her children, and the details surrounding her death and its aftermath.

A discussion following the film will include its powerful story, and how her bravery calls us to action today.

A virtual option can be arranged for those not comfortable with attending in-person. To make any arrangements, please contact the Racial Justice Team at: 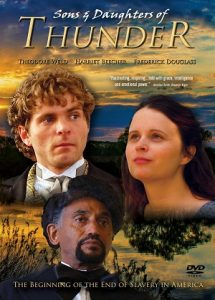 On Wednesday, October 20, at 7:00 p.m., Christina Hartlieb, Director of the Harriet Beecher Stowe House in Walnut Hills, will share stories about the house which was the residence for Lyman Beecher, the president of Lane Seminary, and his family. This in-person event takes place at the Lutheran Church of the Resurrection, 1950 Nagel Road, Cincinnati, Ohio 45255.  Please register (for free) at the Eventbrite October 20  Registration Page.

The following week, on Wednesday, October 27, at 7:00 p.m., Ms. Hartlieb will introduce the film, Sons and Daughters of Thunder. The film tells the unforgettable true story of the first-in-the-nation 1834 emancipation debates led by the students at Lane Seminary, including firebrand abolitionist Theodore Weld, and the debates’ effect on young Harriet Beecher’s views of slavery. A virtual interview with the directors will follow the screening. This in-person event takes place at the Lutheran Church of the Resurrection, 1950 Nagel Road, Cincinnati, Ohio 45255. Please register (for free) at the Eventbrite October 27 Registration Page. 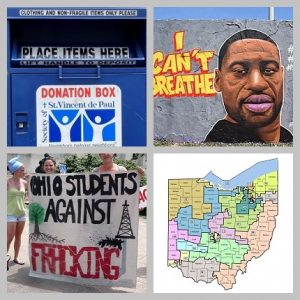 Food security, racial justice, environmental concerns, and fair voting districts will be some of the topics discussed at the Social Justice Collaborative Meeting. Other topics include housing security and homelessness, indigenous peoples, gun reform, LGBT+ concerns, and economic justice. We gather to share information and support each other around these passions. All Heritage Church members and friends are welcome. A Zoom link will appear on the church homepage prior to the meeting. 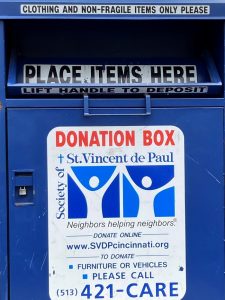 The Inter Parish Ministry (IPM) location in Amelia now has a clothing donation box like the existing box at the Newtown location. IPM has partnered with St. Vincent de Paul to provide clothing for IPM clients unable to pick out clothing in the pantries due to Covid restrictions. St. Vincent de Paul collects the clothing and in return provides IPM with clothing gift cards for IPM’s clients to use. 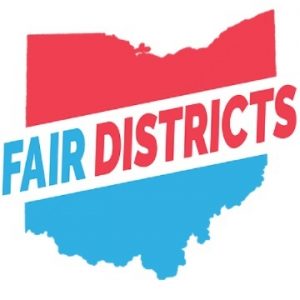 When public officials (of ANY party) draw legislative district maps to benefit only their own political party, it hurts our democracy.

Due to laws enacted in the last few years in Ohio, the redistricting that is about to take place is likely to be less gerrymandered than in the past. However, the delay in the delivery of 2020 census data may result in less-than-ideal districts being drawn at the last minute and being put into effect without public hearings.

Several Heritage Church people have been learning more about the current situation and what can be done. To learn more, go to the Fair Districts Ohio website, or contact Russ Araujo at:

As an expression of our faith and values, the Unitarian Universalist Association (UUA) takes positions on relevant issues of social justice. Issues are selected by Unitarian Universalist member congregations for three years of study, reflection and action. In the third year of this process, delegates at General Assembly (GA) can vote to approve a Statement of Conscience (SOC).

In June, a Statement of Conscience titled “Undoing Systemic White Supremacy: A Call to Prophetic Action” was approved by an overwhelming majority vote. In the fall here at home, the Heritage Racial Justice Team will be inviting everyone to participate in learning more about this powerful Statement of Conscience, and working together as a congregation to help build “universal justice and equity.”

You can read the full text of the SOC at the link at the end of this article. Excerpts include these words from the introduction and four key action points:

The Racial Justice Team encourages all Heritage members to read the SOC, dig deeper to expand your knowledge and understanding of systemic white supremacy and its 2021 manifestations, and join the work of building the Beloved community. We will be announcing meetings for the fall, so please stay tuned, and reach out with questions or interest at:

Read the full Statement of Conscience on the UUA website:
https://www.uua.org/action/statements/undoing-systemic-white-supremacy 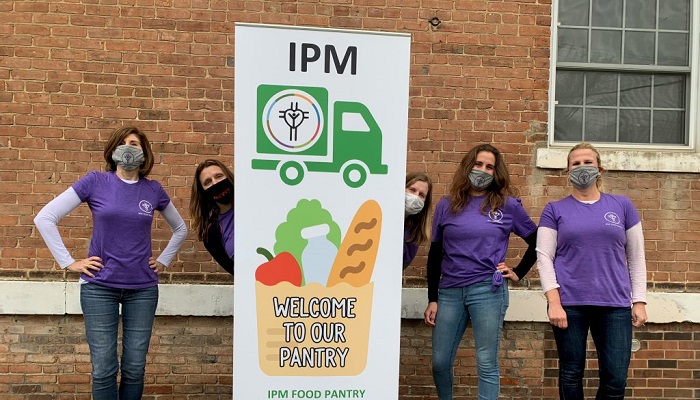 For years, Heritage UU Church supported the Inter Parish Ministry choice food pantries with donations of food and household supplies. The pandemic put a halt to these physical donations, though we continued to support IPM with our outreach offerings. Now IPM is accepting food and supply donations again.

To add a little fun, you might want to donate food especially for meal kits, as IPM describes below:

Did you know? IPM is once again accepting food donations! Right now we are working to supply our new program, IPM Plates! We LOVE to provide families with a complete, nutritious meal in a bag containing all of the ingredients, ready to prepare with simple instructions. Please help us create Taco Tuesday and/or Barbecue Night by donating the following: taco shells, taco seasoning packets, canned chicken, barbecue sauce, and hamburger buns! Thank you for your support of IPM and our neighbors in need. We are so grateful when you join us in feeding families and nourishing souls.

You can also donate other food and supplies. You can always look online to find a list of IPM’s current needs.

Donations can be delivered to either the Newtown or Amelia locations:

If you have any questions about the Heritage Church involvement with IPM, please talk with Bob Drake, Kay Inskeep, Regina Pugh, or Mike Roberts, or send them an email at: 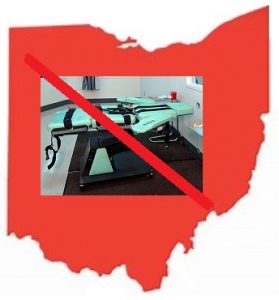 Heritage’s Racial Justice Action group is focusing on an important moment for Ohio and we invite you to join us. Ohio is poised to consider abolishing the death penalty. Identical bills have been introduced in the Ohio Senate and the Ohio House of Representatives by bipartisan sponsors and with strong bipartisan support; SB 103 and HB 183.

Many people, including many UUs, believe that capital punishment is inherently immoral. Studies show it does not deter crime, is disproportionately applied to Black and poor people, and is applied unevenly across cities and counties. What may be surprising is that it is more expensive than sentences of life without parole.

A majority of Ohioans of both parties oppose the death penalty when a sentence of life in prison without parole is an option. Governor DeWine has placed an unofficial moratorium on executions in Ohio because the state has been unable to find the drugs to carry them out without violating the 8th Amendment’s prohibition of cruel and unusual punishment. In addition, the Columbus Dispatch reports that, “For every six executions in Ohio, one person has been exonerated.”

Ohio could join the 23 other states that have already abolished the death penalty. Please consider adding your voice to support these bills. What can you do? You can write or call your representative and senator to support abolishing the death penalty in our state. You can also participate in our meetings which are the second Monday evening of each month (next one is April 12) to help plan collective action. The Zoom link will be on the Heritage Church homepage before the meeting.

If you have questions, please contact Louise Lawarre and others on the HUUC Racial Justice team at:

Did you know that Heritage Church has an account with Kiva.org? Kiva is an organization that uses crowdfunding to make loans to remove barriers to financial access around the world. They currently work in 77 countries and provide loans that support a variety of needs including small businesses, education, home improvement, healthcare, the arts, and agriculture.

Utilizing an outreach offering in May of 2017, Heritage opened a Kiva account with $604 and made four loans. Loan recipients were chosen with the help of Heritage youth. As those loans were paid back, new ones were made. Since 2017 Heritage Church has made 23 loans to 16 countries totaling $1575.

Loans must be at least $25 and we will soon have enough money in our account to make a new loan. If you have a young person in your home who would like to help choose the next recipient, send a message to

All in-person gatherings require masks and other safeguards. Check an activity’s description, or with the host, to learn the venue. You can learn more at HUUC Policy Related to COVID-19.