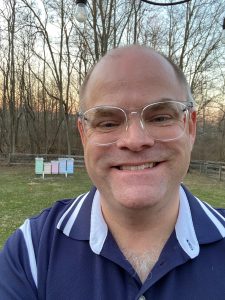 Kevin Palmer joined Heritage Church with his wife Laura in 2018. In January 2022 he joined the church staff as Technology Coordinator. He has a degree in Mechanical Engineering from the University of Cincinnati. He brings to Heritage over 25 years of information systems experience, ranging from graphics and print production to business systems. Kevin enjoys spending time with his family, camping, home renovation and maintaining the fleet of vehicles for his family. He and Laura are beekeepers, wrangling a few hundred thousand bees in their back yard. 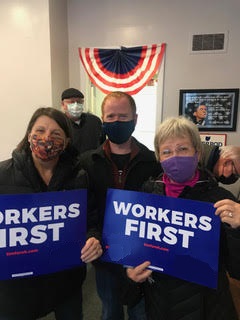 Tracy Jo Small, Bryce Gray, and Joann Meyer participate in a rally for democracy in Batavia, Ohio, on January 6, 2022.

January 6, 2022, marked the one-year anniversary of the attack on the U.S. Capitol. Heritage UU Church people took part in vigils and rallies for democracy at three area locations: at the Cincinnati City Hall Plaza, outside Allen Temple AME Church in Bond Hill, and in Batavia, Ohio. At the City Hall Plaza event, HUUC’s Peter Boylan played taps, and Rev. Mitra Jafarzadeh, from St. John’s UU Church, was one of the speakers.

Heritage Universalist Unitarian Church returned to holding an in-person Christmas Eve service for 2021. Participants could join the service in the sanctuary, in the Great Hall (where a new, large video screen has been mounted), or via Zoom. These photographs are courtesy of Bill Lyon. 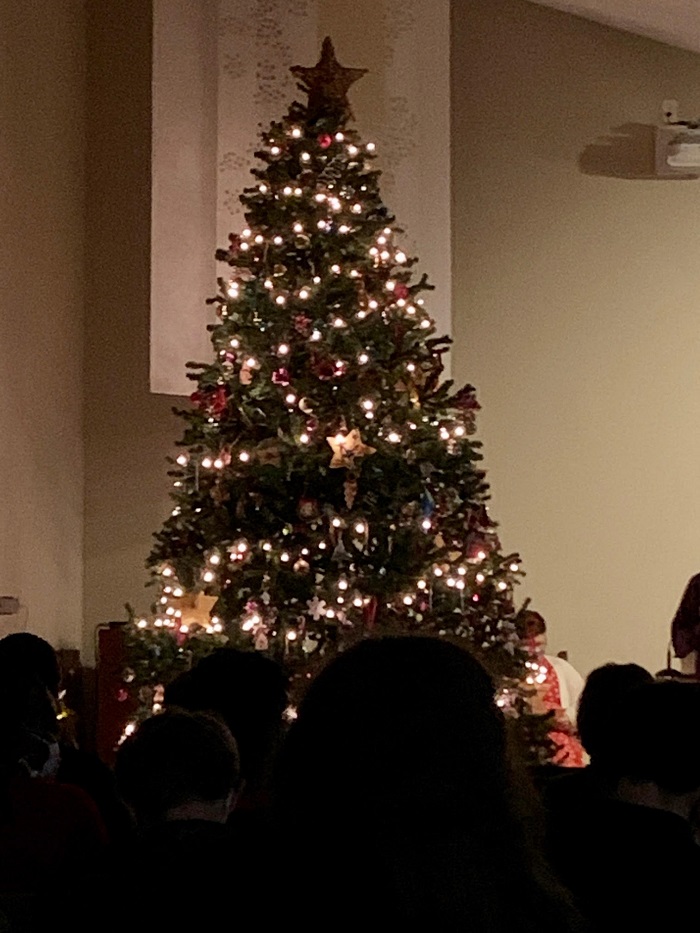 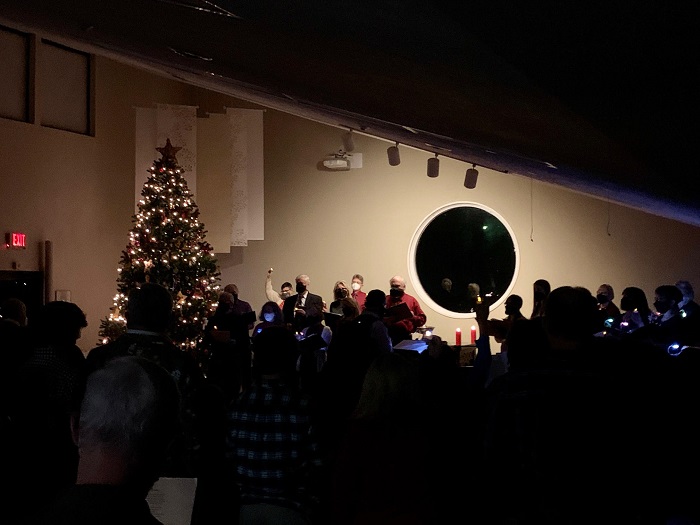 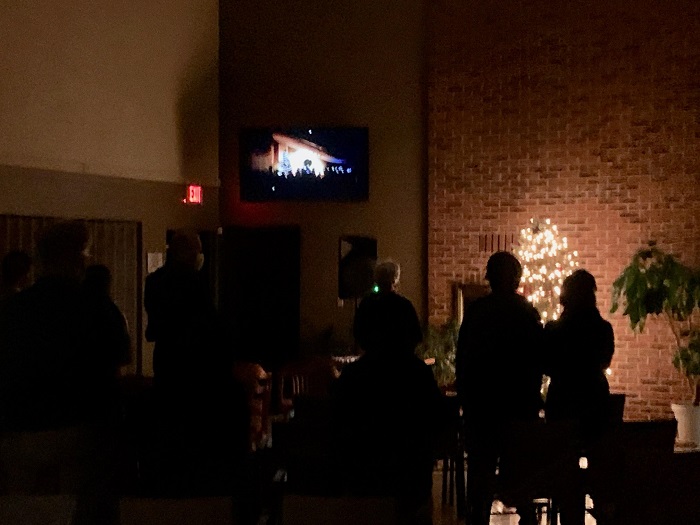 The Clara Barton Guild is pleased to inform the congregation that we have replaced the landscaping we lost when we had to remove the two Colorado Blue spruce that graced our northwest corner along Newtown Road. We have installed two Green Giant arborvitae and three Allegheny viburnum. We would like to dedicate our new landscaping to the memory of Connie Booth, longtime supporter of the Clara Barton Guild of which all the women of Heritage are members. We remember her with love and thanks for all the care she gave the people and gardens of Heritage Universalist Unitarian Church. Bless your memory, Connie. 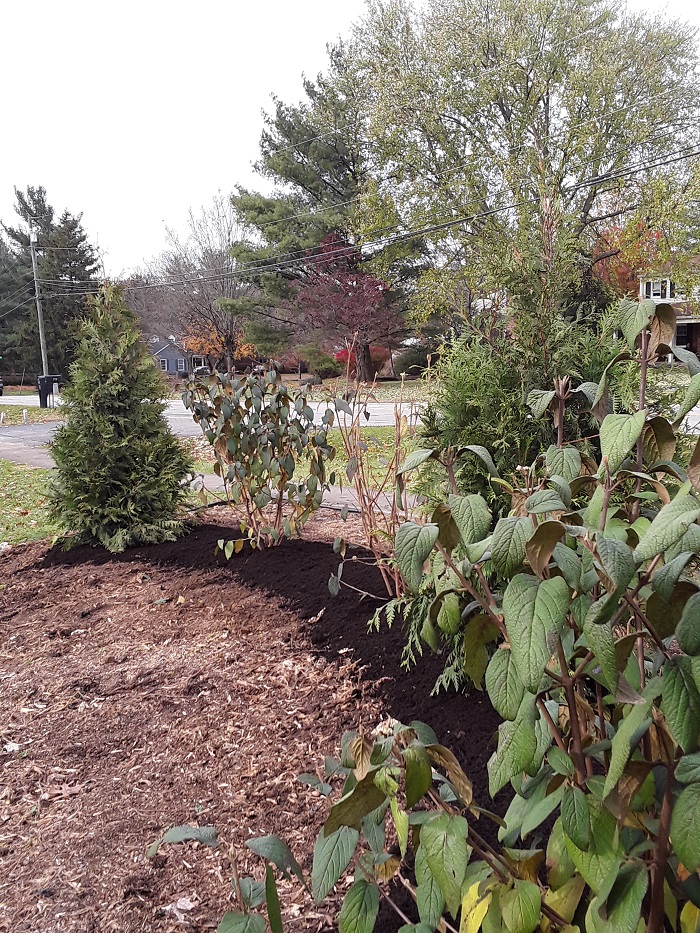 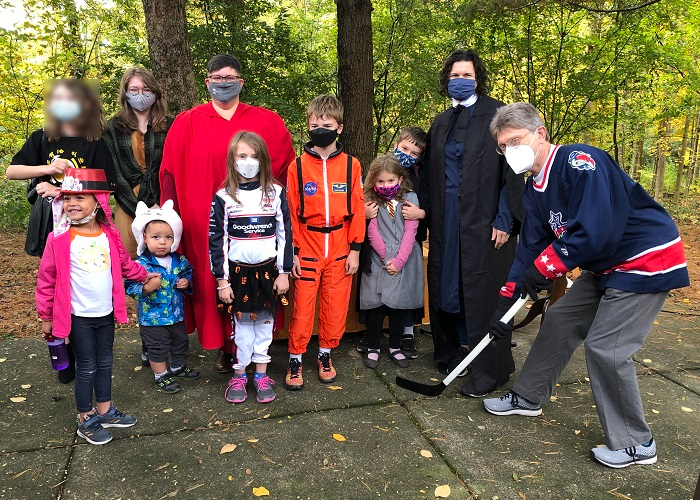 Here are a few of the costumes at the worship service on Sunday, October 31, 2021. 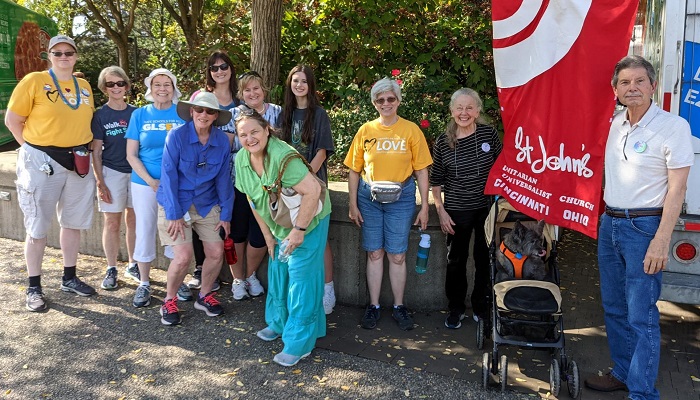 On October 10, 2021, Heritage Universalist Unitarian Church member Rebecca Pace (third person from the right in the picture above) joined others from Harmony UU and St. John’s UU Church in the city-wide Out-of-the-Darkness Walk. The walk was held to raise money and awareness to prevent suicide. The UU “Side with Love” team raised $1,370.

Out-of-the-Darkness Walks are promoted nationwide by the American Foundation for Suicide Prevention.

Thanks go to the twenty people or so who worked on Grounds Beautification Day, September 18. Here are a few pictures. 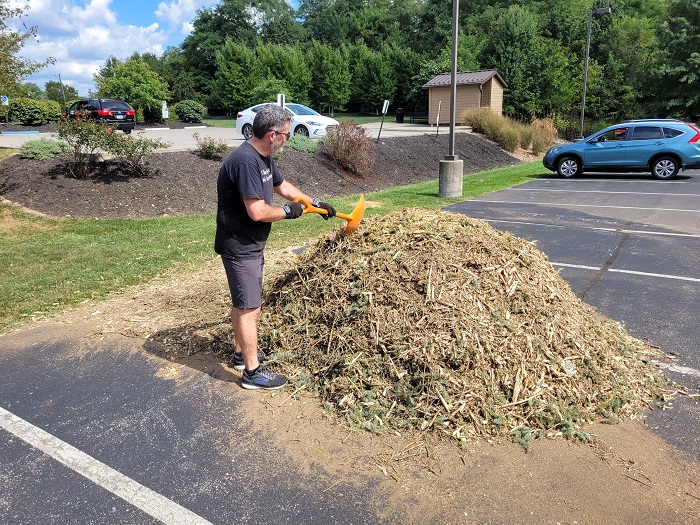 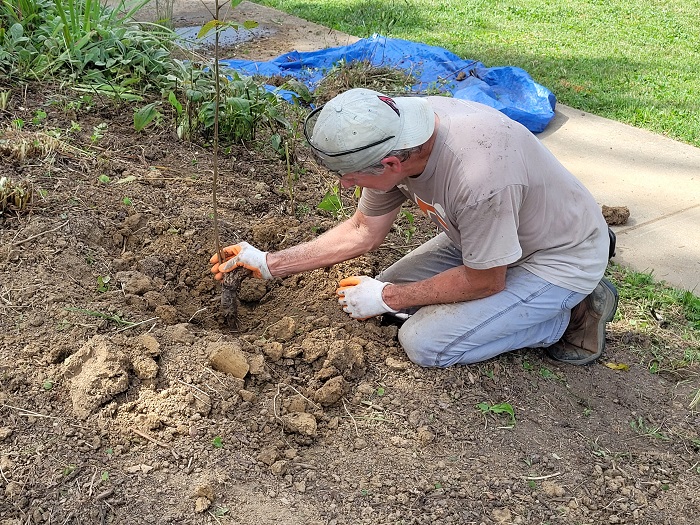 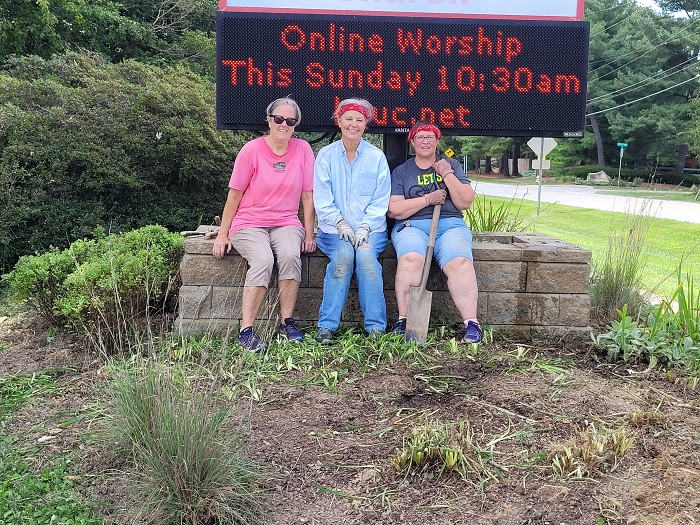 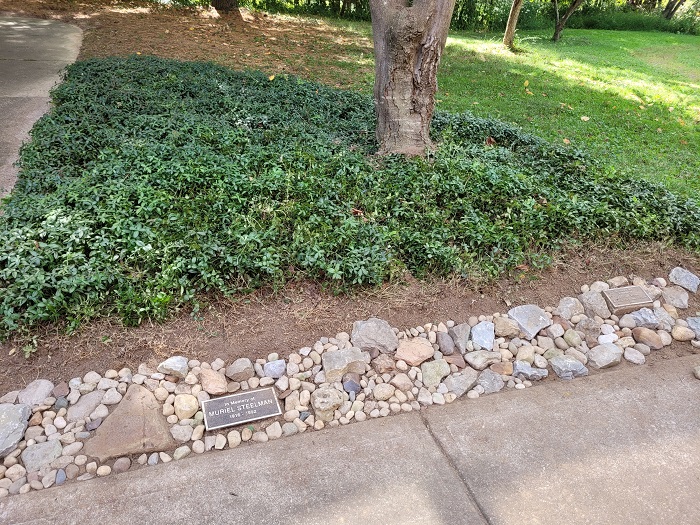 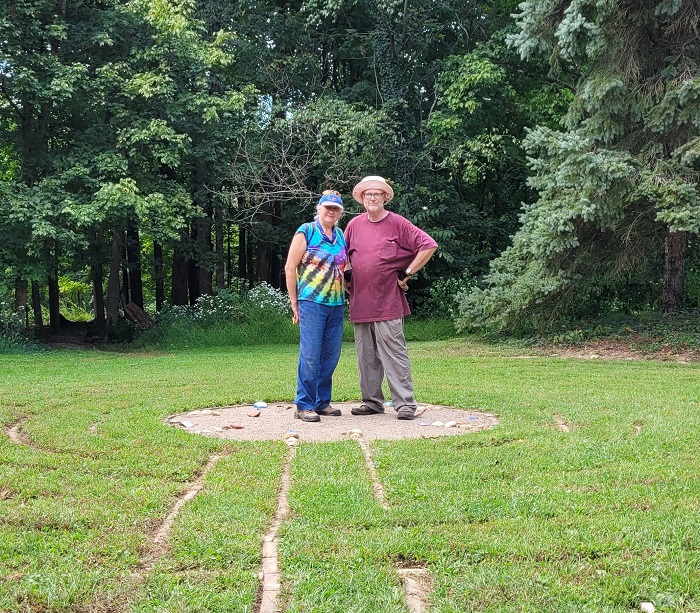 On Saturday, September 19, 2021, at the beginning of our Church Beautification Volunteer Work Day, a somber ceremony marked the end of an era at Heritage as our two remaining memorial trees – planted just after our current building opened in 1985 – were removed. The trees had been dying for a couple of years, and no longer even had very many of their evergreen needles remaining.

Three young evergreen trees were planted next to the entrance to Heritage Church as part of the opening of our building, and they flourished, as did the congregation. They were known as the “Three Sisters,” in honor of three church matriarchs – Clara Hasameir, Alma Weiner, and Elsa Waterman.

As the three evergreens grew, several older church members who had been with us since the time we were known as First Universalist Church – including those three elder members of the Clara Barton Guild – passed away, and the area around the trees became the first memorial garden at our new location. Bob and Meredith Vickers’ ashes are buried there, and others’ have been scattered under those beloved trees.

In time, one of the “Three Sisters” itself died, the victim of a bagworm infestation – but the other two thrived so much, and grew so tall and brilliant green that in 2016 they won the very first “Great Tree Award” given out by Anderson Township.

The late Connie Booth, who by then had become one of our wise elder women, was present to receive the award when the trees were honored by the township. Connie, of course, was a horticulturalist and a Master Gardener, and knew just how special, and how delicate, these Colorado Blue Spruce trees were. She also happened to be a native of Colorado herself.

Sadly, not long after we received the Great Tree Award, the two remaining trees developed a fatal fungus called “needlecast,” the result of a particularly wet spring. The disease causes evergreens to lose their needles, and slowly die. After several treatments by an arborist, it was determined that the Two Sisters could not be saved, and so on September 19, 2021, they came down – but not before we said a few words of thanks and honored all that they had meant and symbolized to our congregation over the years. 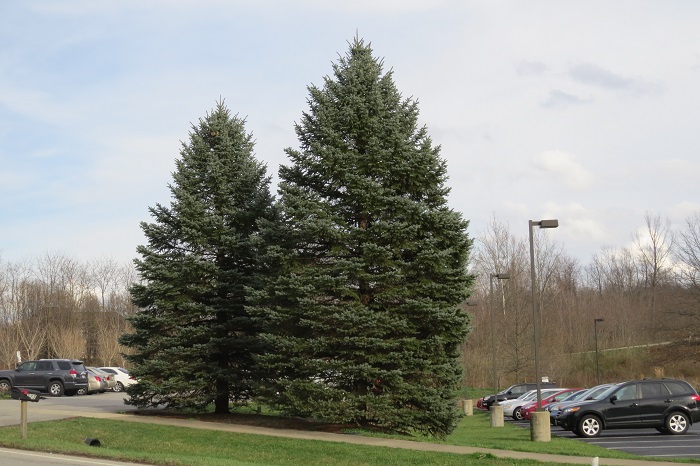 The “Two Sisters” evergreen trees when they were healthy. 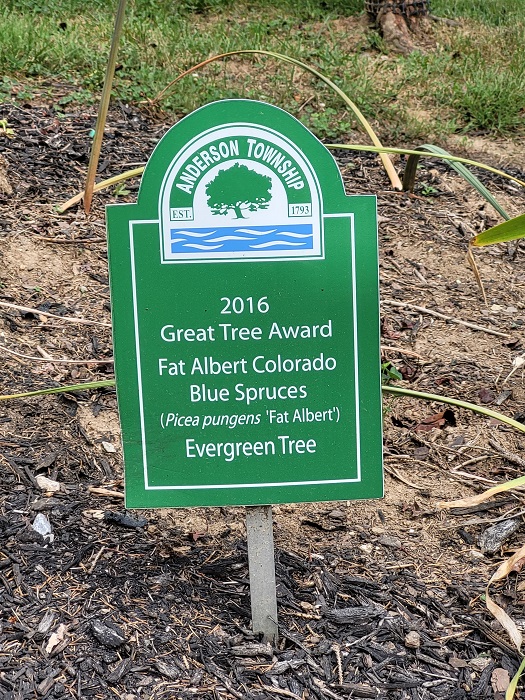 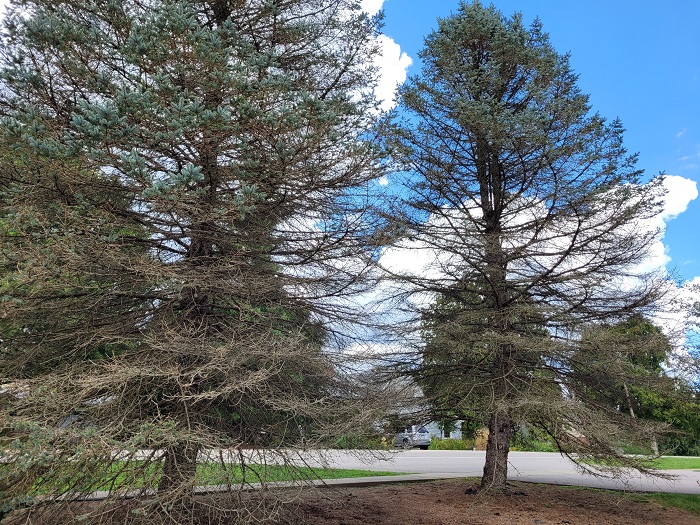 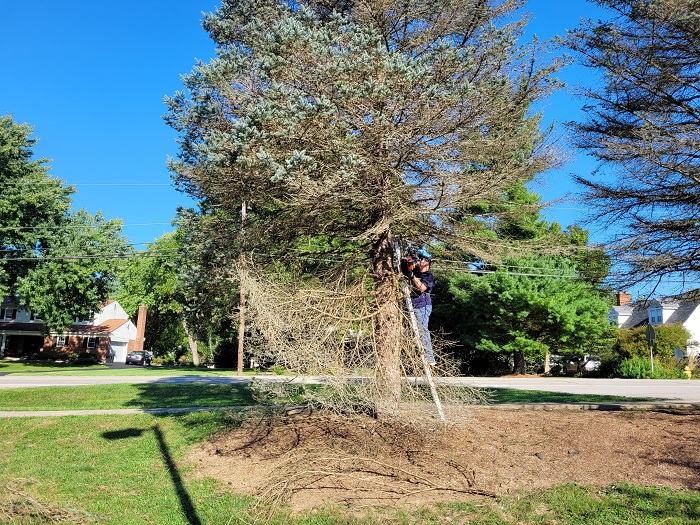 Preparing to cut down a tree 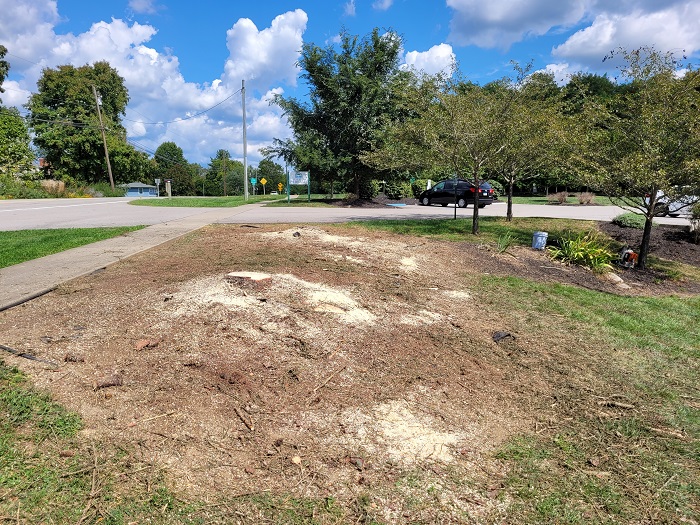 After removal of the trees

After a summer of meeting alternate weeks for Sunday worship at Moundview Park, we held our last service there for a while on August 29. (Our upcoming services will be a mixture of outside at church and Zoom-only.) A couple of Heritage Church members took a few pictures that day to commemorate our time at the park. 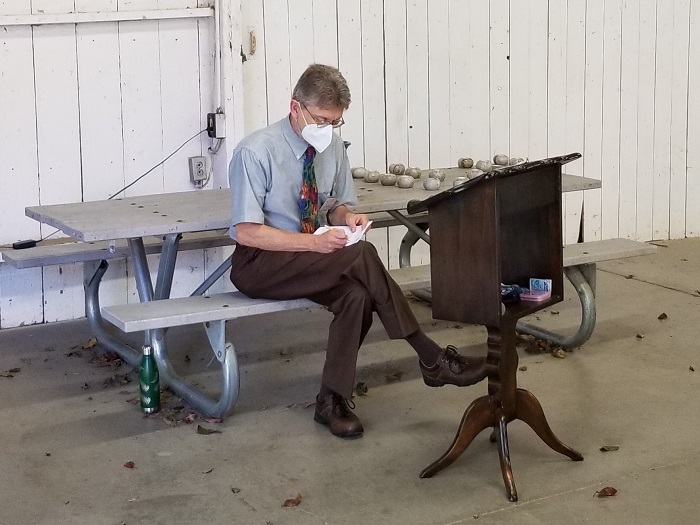 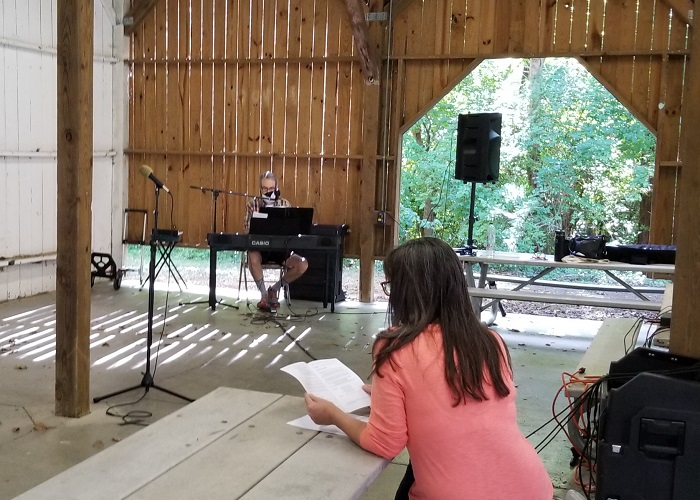 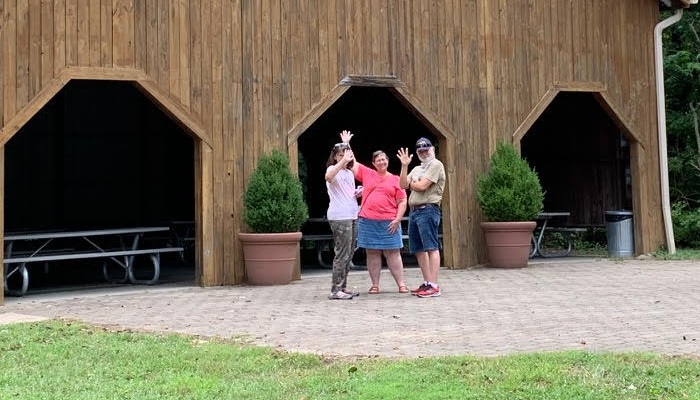 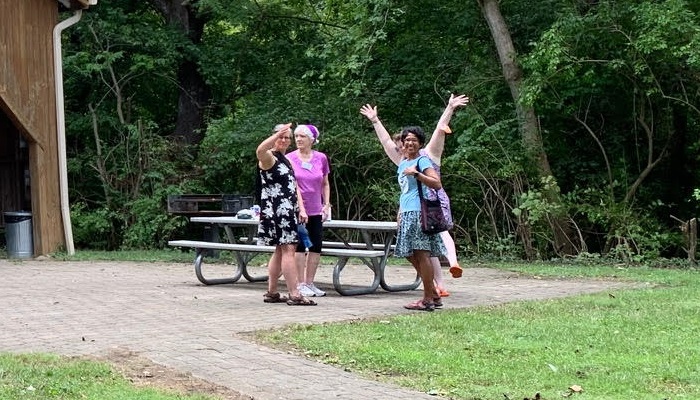 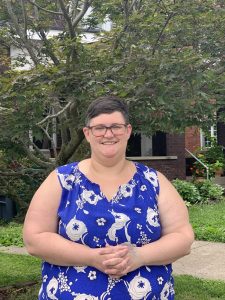 She came to Unitarian Universalism via the United Methodist Church, where in 2007 she completed an M.A. in Specialized Ministry with a concentration in Spiritual Formation and Religious Leadership at the Iliff School of Theology in Denver. Her B.A. was in Religious Studies from Centenary College in Shreveport, La.

She and her wife, Emily Popler, are the proud parents of 18-month old Benjamin Alexon Popler-Adams (Ben). They live in Northside. Emily is a Clinical Fellow in the Division of Adolescent and Transition Medicine at Cincinnati Children’s Hospital.

We look forward to welcoming Laci as our very first Director of Lifespan Faith Development. She will officially join our staff on Sunday, August 1. We invite you to come meet her at our in-person, outdoor worship service that morning.