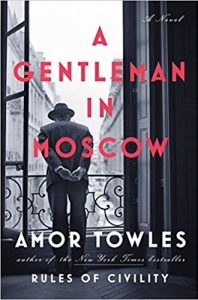 By the time this Heirloom goes out the holidays are nearly over. May the diets and other New Year’s resolutions begin! (Urgh!) But the Babes with Books (Heritage’s women’s book club) has scheduled three good reads to enjoy with during our dreary winter nights.

For our January 15, 7-9 p.m. meeting in the Heritage room, we’ve selected A Gentleman in Moscow, by Amor Towles. Get this selection early as it is a lengthy but easy read. As described by an Amazon.com reviewer, “A Gentleman in Moscow is the 30-year saga of the Count Alexander Ilyich Rostov, who is placed under house arrest inside the Metropol Hotel in Moscow in 1922 when the Bolsheviks spare him from death or Siberia because of his revolutionary poem. The relationships he forms with staff and guests, his handling of twists of fate, his moral rectitude and his perseverance to go on in the face of his lifelong imprisonment for being a ‘Former Person’ make for a compelling tale, told beautifully by Towles.”

Our February and March selections, always subject to change, currently are as follows:

Unless otherwise noted, all selections are held for us at the Anderson Township public library. All women members and friends are invited to all BWB gatherings, whether or not they have read the selected book.

If you have questions, please speak with Barb Barnes, or email her at: