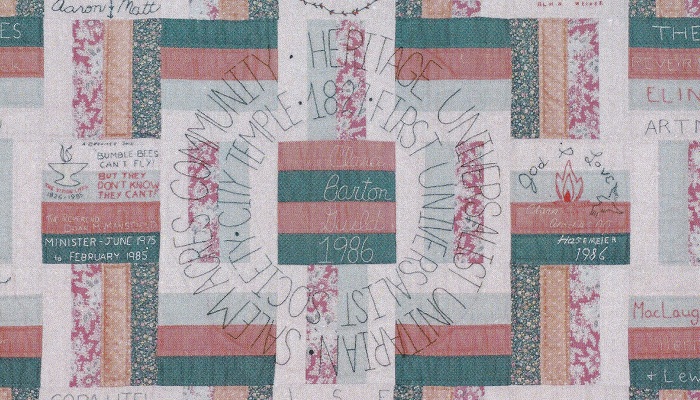 The Clara Barton Guild was established in 1917 under the name First Universalist Society’s Women’s Alliance. Following a long tradition of Universalist women, the group not only provided support for various church activities, community outreach and sisterly fellowship among the church’s women, but raised monies to support various worthy causes both within the church and beyond.

Universalist women have always had their own money to work with, separate from the church funds, and our Clara Barton Guild followed in this long tradition.

In the 1960’s, one of the church members, Cora Littell, bequeathed 100 shares of P&G stock to the church and 100 shares to the Clara Barton Guild. Since that time, the guild has used the monies from the interest on the stock to pay for many projects that were not in the church’s annual budget.

Additionally, the Guild has given annual gifts to various local agencies and charities at the holiday time and to the Clara Barton Camp for Diabetic Girls which is located in the northeast. A commemorative brick was purchased by our guild during a recent fund drive at that camp.

Other fund-raising efforts the last few decades have included the Easter Breakfast (begun in the Salem Acres years to pay for repairs to the swimming pool), Dining for Dollars, a Gift Wrap sale and the almost-annual Used Book Sale.

The quilt hanging in the Fellowship Hall was a Clara Barton Guild project held to raise funds for the present building. Blocks were sold to families to embroider their names or wishes upon, and then the women of the Guild assembled the quilt. Even though the quilt is now faded, it is a testament to a hopeful and energized point in time for our congregation.

When plans were forming to sell the Salem Acres nine acres and purchase this property, the women of the guild agreed, to the request of the Board of Trustees, to merge its investments with those of the congregation, thus allowing for more diversified portfolio management. This was agreed upon, with the stipulation that the Clara Barton Guild would continue to receive dividends each quarter equal to those previously earned with their separate stock holdings. This amount was between $300- 400 quarterly.

These payments continued to be made to the guild while the principle of the jointly held stocks continued to decrease. After a few years, it became apparent that the amount left in the endowment was equal to the original holdings of the guild.

Basically the Clara Barton Guild owned all of the church’s investments. This situation just did not seem right, so the women met and decided that since the women were all part of the church anyway, that the original arrangement would be dissolved. There would no longer be ‘our’ and ‘their’ funds – it is all OUR funds.

A ceremony to release the former arrangement was held during a worship service to commemorate that decision.

Needless-to-say, the funds available for the previous generosity to fund various projects were no longer there. The guild still has a bank account to work with and holds fund raising activities.

As the church has grown during the last 25 years, the Guild has transformed as well.

For decades, monthly evening meetings were held, officers were elected, dues were collected and programs scheduled, all activities typical of the era for the women of the group. These cherished women elders provided significant leadership to the Clara Barton Guild over the years, but with most of them being in their 80’s and 90’s, attendance understandably declined. (More later on this)

During the early years in the Newtown building, the guild inducted several of its members into the Clara Barton Sisterhood through the UUWF, the Unitarian Universalist Women’s Federation. In order to receive this honor, members had to be 80 years old. In our small congregation there were EIGHT honorees:

Grace Scott, Josephine Hopkins, Meredith Vickers, Florence Case Angus, Frances Carpenter, and the three sisters: Clara Andress Hasemeier, Alma Weiner and Elsa Waterman. While Alma and Elsa were members of other churches, the three of them belonged to the Clara Barton Guild and attended all of our church social functions.

A ninth woman, Muriel Steelman, was given a service recognition honor since she was only in her seventies. *Note: Hymnbooks were purchased by the Guild to honor these women. Check the dedication plate in the front of the hymnbook on Sunday morning – you may find one of those names.

Since that original group of honorees, others have been honored as well: Hermine MacLaughlin and Ginny DeHavilland were given the service recognition honor

The Rev Elinor Artman was inducted into the Clara Barton Sisterhood in 2008.

Back to the declining membership issue – After a couple of women’s retreats, attended by mostly younger women, the New Women’s Group was formed. This fostered a problem:

The Guild with its dwindling membership had the bank account and the new, younger group had the energy and attendance.

Two of the women belonged to both groups: Meredith Vickers and Muriel Steelman, both pillars of the church community. They approached the women of the New Women’s Group, and asked if, for the sake of administering the monies, would the new group please assume the name of The Clara Barton Guild. And so it happened. But in the new group, there were no dues or officers, and programming was on a much more casual basis.

As demographics changed, several smaller women’s groups were fostered. Among them were the Women’s Meditation Group, the Women’s Book Club, a toddler play group for moms of our youngest members, and a few others. Start-up funds for supplies and special projects were available to these groups from the guild, which was more of an umbrella group.

Over time, attendance at the various groups has waxed and waned with interest and time available. No doubt new activities will emerge, and some will re-emerge according to the interests of the women in the congregation.

The two activities that have remained constant during the last decade, are the dinner held each year during the holiday time, usually the first Wed. of December, and the Salad/Dessert Potluck usually held in early June. (this may be resurrected)

And, lastly, in keeping with the Universalist attitude and tradition, all women of the congregation continue to be considered part of the umbrella of the Clara Barton Guild, no matter the longevity with the church.

All women are welcome. We are glad you are here.

*note that the furnishings for the Heritage Room were a Memorial for Hildegard McHale, mother of Rev. Elinor Artman and include the soft chairs, cabinets and lamps.